skip to main | skip to sidebar

On Sunday October 13, 2002, my fiancée and I were long distance. She was finishing up her college degree and I was working in Chicagoland. We had attended a wedding this particular weekend, and had driven back to college on my way back to my apartment. I was driving on a two-lane Missouri highway, listening to music and driving without cruise control for some reason. I usually would set my cruise control for a bit over the speed limit where I might manage to avoid attention from police yet this particular day I was going without it, and as a result was traveling a bit slower that I would have normally.

Suddenly, a fox appeared in front of my car on the left-hand side. I swerved the car to the right off the edge of the pavement with right-side tires onto the gravel shoulder, and turned back to return to the road. The car started skidding with the rear moving to the right. I recalled some old driving test television shows I watched in my early teenage years and knew I was supposed to take my foot off the gas and turn into the skid, and to be careful not to overcorrect. I took my foot off the gas, I turned into the skid -- too much. The car continued skidding, this time off to the right-side of the road. I saw an overpass ahead around the corner. I saw a car coming from the other direction. Then I saw grass as the car turned toward the rising hill off the side of the highway and my car skidded further off the edge of the road. I didn't really have time to even process it, but I was glad to be moving away from that car.

The next thing I knew the car was upside down. I was suspended by my seatbelt and didn't want to be like that. I put a hand on the roof of the car to brace myself as I unbuckled and rolled myself out of the car. My door opened perfectly, the window still whole in fact. The windshield had shattered. Every other window was shattered. The car was upside down, over the guardrail it had just smashed thru. It wasn't until I got the police report and saw the officer's sketch that I realized how exactly the car got to that position. The driver's side door behind me was demolished. I can't imagine any person sitting in that seat surviving the crash. I was a foot away from that. Had I been driving a bit faster, it's just as likely that I would've hit the guardrail at my door instead of the empty one behind me. 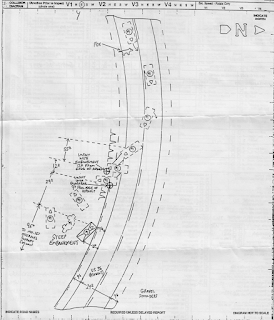 I was impressed and grateful for all of the people who stopped and helped to call 911. I'm especially thankful for the police officer who found my phone and glasses among the belongings that had flown around in the wreck.

A colleague of mine told me about a belief in China that surviving an experience like this one meant I was marked for something great. I've keep considering this. I want my life to be worthy of this gift. This borrowed time that I'm living on since that day. My family is the legacy I care most about, and I cannot be prouder of what Katie and I have grown. All of our children are so smart, kind, playful, and empathetic.

I was fortunate enough to be one of the first developers to make apps on the App Store, and my Flashlight app has been used by millions of people. That's still so surreal for me to think about, and I'm so thankful for the opportunity to share my work with so many people.

I've had 13 years since this crash, and I've thankfully been able to do longer road trips without thinking about this. Some things certainly fade with time. My wife's birthday is November 13th. My daughter's ultrasound was on Friday the 13th.

I want to thank everyone involved with PixelPop Festival this year. I was delighted to have an opportunity to show my games and show an preview of my new game, Stacker. It's truly heartwarming to get to see people experiencing my creations for the first time and I got so much great feedback and so many great ideas to add. I'm putting my iOS games on sale for $0.99 this week until September 20th.